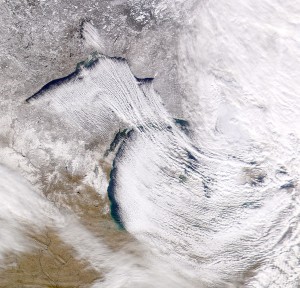 How prepared are you and your family for this winter? After last year, it’s understandable that many in the Grand Rapids area are buying salt in bulk and investing in new snow shovels. The winter of 2013-2014 broke records. In Grand Rapids, we experienced 116 inches of snow, which was more than four feet beyond the previous year and the second-largest on record.

This year, the precipitation is going to be milder, but that doesn’t mean the temperatures will be much higher. The Old Farmer’s Almanac predicts this winter will be much colder than normal through mid-February. They also predict the most snow will fall in late January and early February.

They expect that in regions west of State Route 131, the average temperatures will still be cold, but average precipitation rates will be considerably milder than the previous year.

The NOAA predicts that Michigan will be up to 40% drier than the previous year, but warn the same might not be true for Michigan’s Snow Belt regions. The lower precipitation levels are due to a relatively weak El Niño season. Since the snow belts are fueled by Canada and the Great Lakes, those areas will experience higher precipitation. The Climate Prediction Center predicts that Grand Rapids will experience five inches less snow than average, which will be 45 inches behind 2013-2014.

The NOAA and local weather experts agree the winter will be comparatively warmer than last year. Last year was extremely cold east of the Rockies, though this year the cold temperatures seem to be concentrated in the southern United States and the Gulf of Mexico.

How to Prepare Your Furnace

The winter is only half over. The weather will still be cold, and it’s important to address your furnace. If you have a furnace that has not been cleaned in some time, it may be time to get your unit checked. We want to provide you with the facts. Your furnaces need cleaning not because clean ducts help improve your health, rather because clean air ducts save you money.

Duct cleaning can make your furnace more efficient, reducing home heating costs. If you can see mold or other contaminants growing on the motor, coils, or other component, the furnace definitely needs cleaned. This is not uncommon if the unit sits in a damp basement, unused, all summer. If you have recently fixed up your home or have animals, the dust and fur can get lodged in critical components.

With a cold winter in full swing, consider having your furnace looked at by a professional. In the very least, change the filter. Also remember that an open damper on an unused fireplace will simply pull the hot air straight from your home.

Whether the unit needs cleaned or is suffering from inefficiency due to some other ailment, call Englesma, your local heating and cooling experts in Grand Rapids!

This entry was posted in Furnaces, HVAC and tagged furnace, winter. Bookmark the permalink.